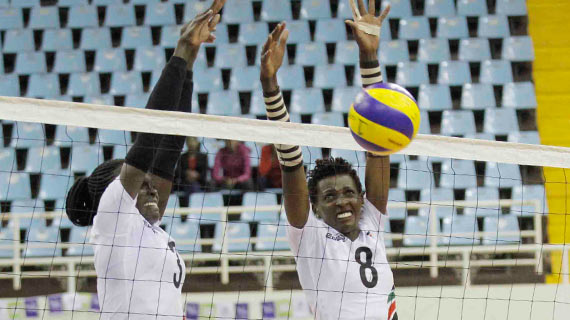 Kenya's women volleyball team , The Malkia Strikers, are a win away from qualifying for the Africa Cup of Nations that will be held in Yaoundé Cameroon in October.

Kenya dominated their opening match from first serve to the end of proceedings with head coach Japheth Munala saying , " The team played well in all departments and I am especially impressed by the young players who field in very well whenever they were called upon."

Among those who were handed  playtime included junior team Libero Celestine Nyongesa who is making her debut appearance at the senior championships.

Kenya will play Rwanda on Saturday afternoon and a win could guarantee the team a place in Yaounde as the top two teams will qualify for the championship in Cameroon.

Team captain Mercy Moim has said , "We want to make sure we finish at the top of the table by winning all matches and we will work hard to perform well at home. Rwanda is equally a powerful team which has improved each year and we approach the match against them with  determination and the same courage like we did  on the opening day."

Egypt exposed experience after overturning an early lead by Rwanda to win 3-1 in  the second match on Friday.

Kenya will face Rwanda on Saturday afternoon as Uganda take on Egypt.

Kenya will then take on Egypt in the final match on Sunday afternoon in a match that could determine who finishes at the summit of the region , depending on the outcome of matches on Saturday.