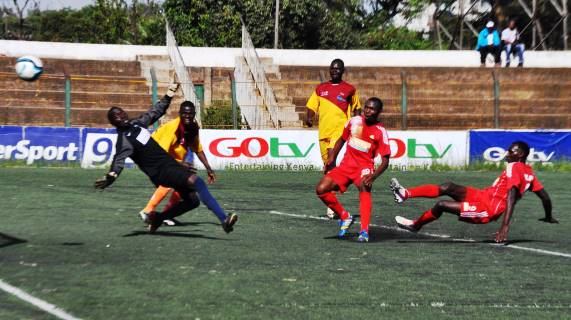 Posta Rangers and Nakumatt both recorded convincing wins to book dates in round two of the Domestic GoTV Cup competition.

Posta were 2-0 winners over Nanyuki Youth in a 3pm match at the Nairobi City Stadium and their victory came after Nakumatt had rallied from behind to brush aside Mumbi Nationale 3-1.

New recruits Jerry Santos and Anthony Gathu who joined the George Maina coached side from Gor Mahia and Kitengela Shooters respectively, fired the Posta  boys to the victory and they will now aim at going the full distance  for the honors that eluded them last season  they fell 2-1 to Sofapaka in the finals.

Early on, Nakumatt who purse springs have of late been opening luring big names, were forced to rally from behind before pulling off a 3-1 win.

Alvin Wafula put Mumbi ahead in the second minute but this was cancelled by a Christopher Wekesa header in the 20th minute.

Kennedy Onyango the handed Nakumatt the advantage from a similar set piece work out in the 53rd minute before Peter Nzuki, confirmed the win late, in the game.

Tomorrow, four matches are lined up with champions Gor Mahia beginning their Cup quest against Langat Premio at the same venue.