POLO: Peroni beaten, but not down- Mike du Toit 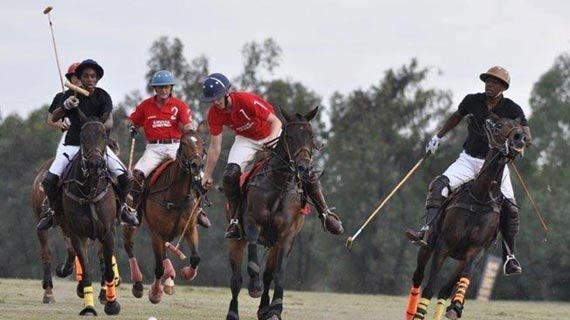 POLO: Peroni beaten, but not down- Mike du Toit

Despite Peroni  bad day on the field on Saturday where they were beaten by both Barbour and Samurai day at the inaugural Soldier’s Salute Polo tourney at the Nairobi Polo Club, captain Mike du Toit stays optimistic that the team will redeem themselves on Sunday.

The four-chukka tournament is played over two days in a round robin format on both days. Two chukkas were played on Saturday and the remaining two of each match are set for Sunday.

Handicapped 1.5, the spectacular Mike du Toit lived to his rating, scoring all his team’s goals of the day’s total four chukkas. Complemented by his teammates- Anthony Wahome, Phylippa Marian and Oscar du Toit in the losing effort, Mike scored their solitary goal against Samurai’s five and a fraction (5F). Raphael Nzomo notched in all the five goals for Samurai.

In Peroni’s duel against Barbour, Mike netted a double but lost 2-4. Chloe Spoerry scored a brace for Barbour whereas one goaler Dominic Grammaticas and Jamie Hayward shot in one goal each.

"All is not lost for our team. We still have a chance to redeem ourselves tomorrow. We have to win the remaining part of the matches," said the spectacular Mike du Toit.

Raphael Nzomo leads the scoring in the tourney with seven goals under his belt for team Samurai who recorded mixed results. The team strategically set him up on numerous occasions to frustrate their opponents, and he did not disappoint. He scored five goals against Peroni, and two to Barbour.

The greatly spirited Nzomo’s two goals against Barbour however, were not sufficient to garner a win for Samurai. In the highly explosive and entertaining clash, Spoerry, Hayward and Kaira Shretta netted one goal each in Barbour’s 3-2F win over Samurai.

The third chukka between Peroni and Samurai start with the latter hitting in from goal. In the second game, Peroni vs Barbour, Mike du Toit ended chukka two by scoring in the dying seconds of the game thus the third period will start from the centre with Peroni hitting.

Game three Barbour versus Samurai will kick off at the 70 yard mark with Barbour hitting in.