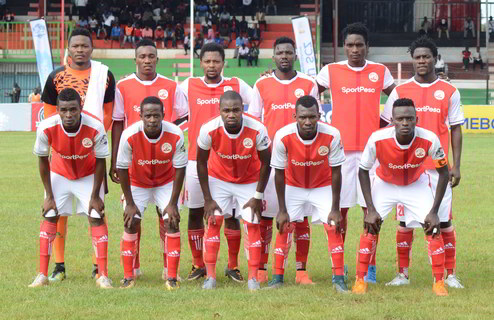 Simba SC players before their game against Sharks

Manara who watched as the club beat Kenya’s Kariobangi Sharks in the quarterfinals on Monday noted that the players deserve it after a tough season that also saw them win the league title back at home.

“We want to make it very clear and early that should the team win this tournament, they will share every single cent of the 30,000 USD prize money. We have said it early so it is up to them to give their all and fight for it,” Manara said.

He also noted that he was pleased after the victory especially against an unknown Kariobangi Sharks side, saying they gave his team a run for their money.

“We cannot underrate anyone simply because we are Tanzanian champions. Look at how the mid-table team from Kenya played. We also watched  Kakamega eliminate Yanga and we know they are a tough team,” he said.

Meanwhile, head coach Pierre Lechantre was pleased with the performance of his side to win on penalties against Sharks and has reiterated they want to go all the way to the final and lift the title.

He was however dejected with the pitch which he said made it difficult for them to play their passing brand of football.

“With the field, it’s difficult to play with one touch. It was a big problem for us and with this kind of field you have to play long pass and run which is not our kind of football,” the French coach said after the game.

On Homeboyz he said; “They are a very tough team. I watched them play against Yanga and I know they will give us a hard time.”