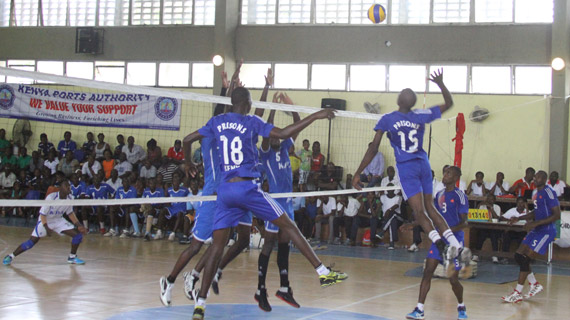 Pipeline win over their fiercest arch rivals saw Prisons set a record for the longest title drought to three consecutive years. Mombasa has never been an easy stage for Prisons who have only won this title once on this stage, in their debut season way back in 2008. The last time they won the title was way back in 2013.

Pipeline who twice lost to Prisons in the regular season got the better side of their opponents but they finished the season on a high, going unbeaten at the playoff.

Prisons opened the match on a high but lost the gas along the journey. The match consumed two casualties, with both captains Loice  Jepkosgei (Prisons) and Noel Murambi (Pipeline) being pulled out with a back and ankle injuries respectively.

The opening set was headed Pipeline's way but a10 minute power outage at the competition venue gave David Lung'aho a chance to have a tete a tete with his squad. Trailing 4-10, Prisons turned the table after resumption when they caught up with the runner away leaders at 17 ups only to wrap the set 25-21.

Pipeline responded in the second set and despite another power blackout, they controlled the proceedings, leading from start to the end.

Prisons suffered the first injury setback after Jepkosgei collided with her libero forcing her to leave the court. She was replaced by Yvonne Wavinya who's presence did very little to stop the marauding Pipeline. The champions rounded the set 25-17 to level the scores 1-1.

The third set was evenly spread and despite Pipeline taking a three point lead (9-5), Prisons rallied back to open one point gap into the second technical time out. After resumption, the wardresses further widen the gap to a three-point lead (19-16) and they never looked back, going all the way to extend their set advantage to 2-1 from the 25-21 win in the third set.

The game consumed the second casualty after Murambi twisted her ankle and was replaced by Naomi Too who helped her side to a 25-23 win to cancelled Prisons advantage and throw the game to the final fifth set.