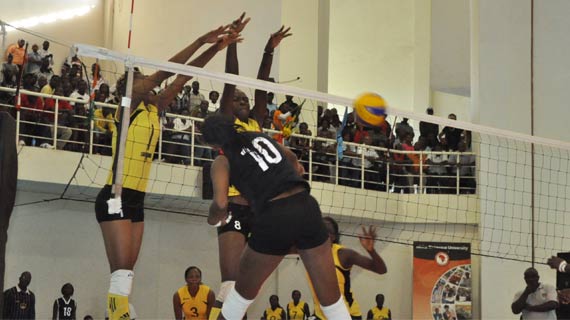 Kenya’s representatives at the African Women Volleyball Club Championship Prisons and Pipeline will clash this evening in an all Kenyan third place play off in Cairo. The two sides lost their semi final clash to Carthage and Al Ahly respectively on Tuesday.

Prisons coach David Lung’aho is upbeat that his girls can finish off with a bronze maintaining the same finish they had last year in Tunisia. Lung’aho says he wasn’t disappointed much with their loss against Carthage, instead saying they lost to a worthy opponent.

“If you look at the set scores, they are very close. It shows that we actually played very well but the difference was that Carthage reduced on their errors. We were good in attack and blocks but we had errors in service, which is normal,” the coach offered.

“But I can say that we played well especially the young girls we introduced in the team. It shows that the future is bright for us. We did our best but unfortunately, the best wasn’t good enough for us,” the coach further noted.

Kenya Pipeline finished seventh last year in Tunis and after trying in futility to quench their 13-year wait for the title, they will be aiming to get at least a medal off their most recent attempt. Skipper Triza Atuka said they will fight tooth and nail to ensure they get the medal off Prisons.

“This is the best consolation we can have after failing to get into the final and vie for the trophy. The players are motivated despite the fact that we lost in the semis and we promise to give Prisons a run for their money,” the middle blocker noted.