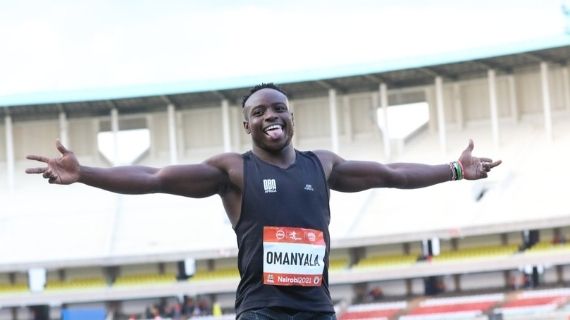 “I don’t want to be an African record holder but without an African title. That is what is driving me and I hope I can achieve the target,” Omanyala said before he departed Nairobi for Mauritius.

Kenyan sprint sensation Ferdinand Omanyala has his eyes cast on a first Major Championship title as he lines up in the final of the men’s 100m at the Africa Athletics Championship in Mauritius on Thursday evening.

Omanyala was unstoppable on the opening day of the Championship, winning the heats and the semis in outstanding dominance and now has his eyes set on the title.

“I don’t want to be an African record holder but without an African title. That is what is driving me and I hope I can achieve the target,” Omanyala said before he departed Nairobi for Mauritius.

The African record holder started off his campaign with a win, clocking a fast time of 10.04secs to claim his heat, ahead of Nigerian Ekevwo Raymond who timed 10.11secs.

In the semis, despite the athletes being held for over 15 minutes at the starting block, Omanyala still breezed to victory, clocking 10.07secs in winning.

Gilbert Maseko of Namibia was second in 10.15secs. Only South African Akani Simbine clocked a close time as he timed 10.09secs in winning the third semi-final heat.

He has now set his targets on breaking the 24-year old African Championship record which stands at 9.94secs.

“I was two years old when the record was set and I believe if the conditions are perfect, I will break the record,” Omanyala said after winning his semi-final.

He has already run 9.86secs this season and he believes he can run even faster, with a touted time of under 9.7secs on his mind.

Meanwhile, Maxmilla Imali will headline Kenya’s hope for a medal in the women’s sprint final.

At the same time, Kenya will have an opportunity of bagging medals in four events with the women’s 100m, 5,000m and 1500m final also scheduled for today.

In the 1500m women’s final, Kenya’s charge will have Purity Chepkirui and Winny Chebet while Caroline Nyaga and Beatrice Chebet lead the charge in the women’s 5,000m final.

Kenya has one medal after the opening day of the Championship on Wednesday after Abraham Longosiwa won bronze in the men’s 10,00om after clocking 29:23.02.