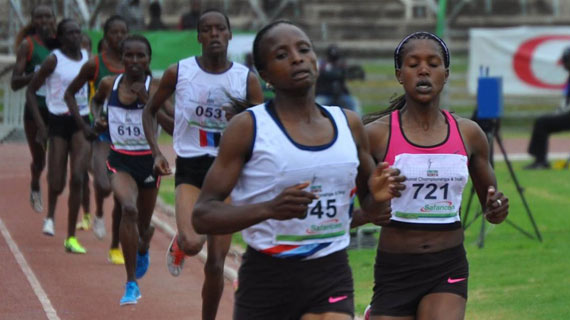 Obiri who is fresh after securing victory at the Compaccio Cross Country where she beat Olympic 1500m winner Faith Kipyegon to second was fighting for the title against Olympic marathon champion Jemimah Sumgong, last year’s winner  Sheilah Chepkurui and Joslyne Jepkosgei.

However Obiri was skilful surging forward calling the shots for the better part of the race.

At the last lap, her competitors were breathing far behind as Obiri who got a silver medal at the Rio Olympics cut the tape in  32:49.08.

Jemimah who won Kenya the first ever women’s  Olympic marathon gold finished second in 33:16.09 and Joslyne Jepkosgei came third in 33:29.08.

In the men’s category, defending champion Kipsang fought hard to win the title.

The hotly contested race saw Kipsang outsprint his rivals on the course to win the race.

KDF was using the event to select its team for the national cross country championships when Kenya will select a  team to the IAAF World Cross Country in Kampala.