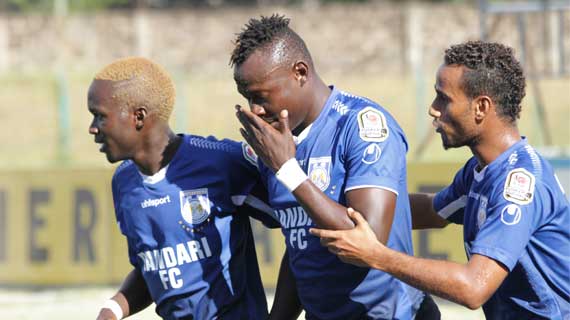 Bandari FC head coach Ken Odhiambo will be boosted by the return of defender Felly Mulumba as he takes his side out to take on Mathare United in Machakos on Saturday.

Bandari FC head coach Ken Odhiambo will be boosted by the return of defender Felly Mulumba as he takes his side out to take on Mathare United in Machakos on Saturday afternoon.

Mulumba has been missing over the last month after travelling to Swaziland for trials with Mbabane Swallows.

“Felly trained well this week and he will definitely be available for Saturday’s game. We are still in talks with the Swaziland club and so before that is completed, he will continue playing for us. It is a boost especially because of his experience,” the tactician said.

His return will be a boost especially with the uncertainty of whether Bernard Odhiambo will be fit enough for the game on Saturday. Odhiambo picked up an injury during last weekend’s loss against Tusker at home.

“We will wait to see whether we can field them or not but if we do, we will be taking a risk. The injuries have slowed us but hopefully we will be able to be strong enough for Mathare,” added the coach.

Bandari has beaten the slum boys only once in 14 match ups with Mathare winning seven while six ended in draws. Despite the lack of wins over Francis Kimanzi’s men, Odhiambo is optimistic he can pick up a second win at Machakos, a ground that has proved to be a good hunting ground for them.

“Mathare is a very good side and they have started the season very well. But we will work to counter their strengths and capitalize on their weaknesses. With a good strategy we will beat them I believe. Especially if we convert our chances,” the tactician further noted.

Bandari are placed fourth in the standings, three points behind third placed Mathare.