Nzoia leave it late to make light work of Wazito 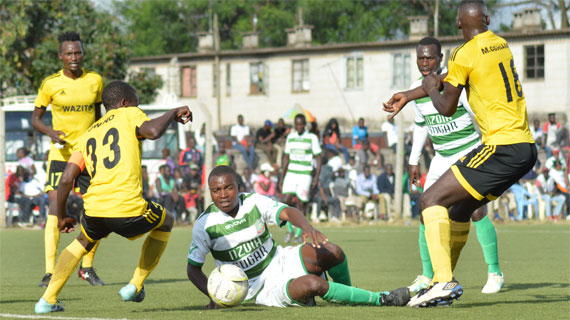 Substitutes Morven Otinya and Victor Omondi scored in the final five minutes of the game as Nzoia Sugar left it late to beat Wazito FC 3-0 at Camp Toyoyo to finish the first leg on a high and move to fifth in the standings.

Elvis Rupia had broken the deadlock in the 19th minute with a sweet strike that handed him his 12th goal of the season as the visitors dominated in Nairobi. Rupia picked the ball at the edge of the box after Wazito defensive midfielder Mark Odhiambo lost the ball cheaply, striking a superb rocket into the top left of Peter Odhiambo’s goal.

Rupia’s goal seemed to have injected some new sense of belief as they played with more purpose. In the 21st minute, David Odhiambo who had been a menace for Wazito almost doubled the tally with a rasping shot from distance which went over by inches.

The hosts had a god chance in the 33rd minute when Joakim Omollo made a good run on the right cutting in a cross into the box, but skipper Dan Owino failed to make good contact under pressure from defender Brian Otieno.

Wazito had an even better chance five minutes to the break when Omollo’s corner from the right landed on Ricky Onimbo’s path at the far post but the defender slammed his shot right across the face of goal.

In the second half, Wazito should have been level seven minutes after the restart but Joe Waithira missed a glorious opportunity after he shot wide with only the keeper to beat after picking up a long ball.

In the 70th minute, they had another chance but substitute Ibrahim Mao took too many touches of the ball at the edge of the box after being picked out by a Ndegwa cut back.

They were punished for the missed chances when Otinya scored with five minutes left with a well taken volley that found the keeper off his feet. Two minutes later, he turned provider heading the ball into Omondi’s path to head home off a corner.