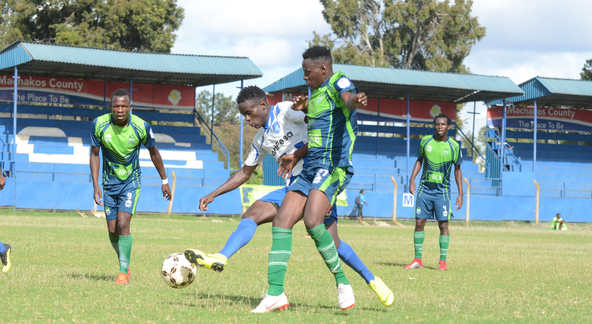 Gor Mahia’s hopes of winning the Kenyan premier League title with four games to go was delayed after they were handed a shock 1-0 defeat at the hands of Nzoia Sugar on Wednesday. Hansel Ochieng’s freekick in the 37th minute handed Nzoia the victory that delay’s Gor’s coronation.

With victory, Gor would have been crowned champions on Thursday if Bandari failed to pick maximum points against Tusker.

However, they can still be crowned champions on Sunday with victory over arch rivals AFC Leopards. Ingwe on their end warmed up for the derby with a 1-0 loss against KCB though just like Gor, coach Cassa Mbungo rested most of his first team stars.

Whyvonne Isuza and Paul Were were not named in the match day squad while David Ochieng, Brian Marita and Soter Kayumba all started on the bench while skipper Robinson Kamura played 75 minutes of the game.

And for the wholesome changes in the team, AFC were made to pay by the bankers who scored the solitary goal through Kennedy Owino. On the second bite of the cherry, Owino scored from a tight angle in the 37th minute after his initial cut back was defended poorly by Christopher Oruchum.

Before that, AFC had struggled to create chances and the closest they came was via a Robinson Kamura ninth minute freekick which was smothered behind for a corner by KCB keeper Joseph Okoth.

On the half hour mark, AFC had another chance when Mukangula swung in a decent volley from the edge of the box after being set up by Boniface Mukhekhe but it was deflected for a corner.

In the second half, Mbungo made changes for AFC, Aziz Okaka and Mukangula who had struggled to make their presence felt in the game subbed out for Wayeka Tatuwe and Vincent Oburu.

But, that didn’t do much to change the color of the game as KCB defended well to ensure they guarded their single goal lead with a lot of jealousy.

AFC had two late chances, Oruchum’s thumping header from a Mukhekhe corner rattling the cross bar while off another setpiece, Wayeka bounced his header just wide.