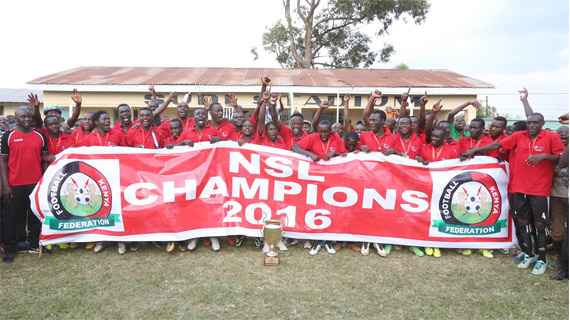 National Super League champions Nzoia United have officially been crowned and promoted to the Kenyan Premier League next season.

The club received their trophy from Football Kenya Federation Chief Executive Officer Robert Muthomi on Saturday at the Sudi stadium in Nzoia Bungoma County after the league final match against Kariobangi Sharks.

After 38 matches, Nzoia managed a total of 92 points with 73 goals and only conceding 20 while losing only two matches.

The team lost their final match against Kariobangi Sharks who needed a win to secure promotion to the top tier league.

“ We are extremely excited as a team and we return all our thanks to everyone who worked to ensure we celebrate in this historic perfomance.We now immediately shift our focus to the board where we need  to re-strategize on how we  are going to attack the premier league.” Said team head coach Bernard Mwalala after the match at Nzoia.

At the same time , Kariobangi Sharks have now won the direct promotion to the premier league after their 1-0 win over Nzoia United on Saturday. With 83 points , Sharks finished ahead of third laced Kericho Zoo who finished on 81 points.