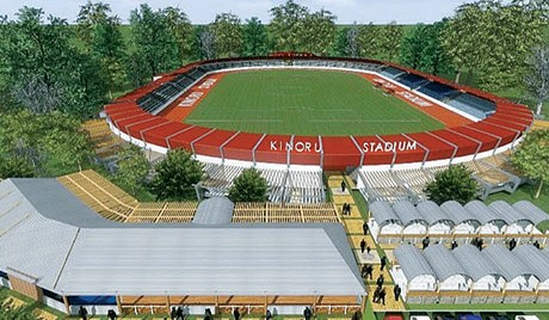 The struggle for match day venues for top tier clubs in the country might be a thing of the past if Sports Principal Secretary Peter Kaberia’s words will come to fruition. The PS has promised that both the Nyayo and Kasarani stadiums will be ready by June 1.

The PS had initially promised that the two stadia which have been under construction will be ready by the end of March but the same as at now will not be tenable.

The Kasarani Stadium is currently being rehabilitated by betting firm Sportpesa ahead of English Championship side Hull City’s visit to the country on May 13.Meru County’s  Kinoru Stadium will also be ready in time as it is scheduled to host the Madaraka Day national celebrations.

“We had some challenges and that is why we couldn’t finish the two stadia as promised. But now we have put everything down to order and I will be making an inspection visit there soon. I want to promise that all those three stadia will be ready by June 1,” Kaberia said.

This will be welcome news for Gor Mahia ahead of their CAF campaign as they have been using the Kenyatta Stadium in Machakos which has dilapidated due to overuse.

They might play their first home match against USM Alger in Nairobi, probably at the Kasarani Stadium. The game is set for May 16, three days after the Hull City game.

“We would want to play there because it is easier for our fans to come to Kasarani and we will have the much needed home support. But again it all depends on availability but we will try our best to play there,” Gor Mahia hairman Ambrose Rachier said.

Kasarani Stadium is being rehabilitated to international standard with the biologically grown grass already imported and laid out.

SportPesa also facilitated the makeover to international standards of Tanazania’s national Stadium when Everton visited to play Gor Mahia in  a record three weeks.Bermuda grass was mixed with rye grass to give the pitch a nice turf comparable to any world class stadia.

Nairobi's City Stadium is set for a complete makeover with Nairobi Governor Mike Sonko promising Gor Mahia llast week that they will soon not need to travel far to host their matches. Six other pitches are also in final stages of tendering within Nairobi County.

Other stadiums whose work is ongoing include Kipchoge Keino Stadium in Uasin Gishu and Marasabit Stadium whose capacity is between 15,000 and 25,000.

Kiambu County has also embarked on development of the colonial age Kirigiti Stadium while County No 1 will be building an new stadium in Mombasa to complement the mini stadiums already completed by the county government.

Sports Kenya has  signed Memorandum of Understandings with Nyeri, Kiambu, Elgeyo Marakwet, Makueni and Tharaka Nithi county governments to oversee development of stadiums in the respective counties after which they will be handed to the county governments for maintenance.

Machakos governor Alfred Mutua has also promised to start construction of a world class stadium in the county.