No State House, No flag as Malkia Strikers silently depart for AFCON 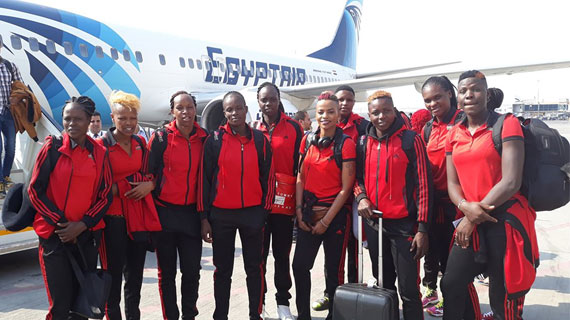 The Kenya women volleyball team , The Malkia Strikers departed Nairobi early Friday for Cairo ahead of the 2019 AFCON

The Kenya national volleyball team  has landed in Cairo Egypt ahead of the 2019 Africa Cup of Nations.

The Kenyan side  left JKIA on Friday morning and  have safely landed in Cairo with players all psyched up to reclaim the Africa title despite a low key treatment by the national government.

This is in complete contrast to the recent treatment to the national soccer team that saw Harambee Stars make several trips to statehouse and a swarm of government officials  visiting the players camp, pampering them with  hundreds of millions, Over 240 Million to be precise .

The  volleyball team silently flew out without even an official flag from the government.

The Kenyan side has been holding intensive training at the Kasarani Indoor arena in Nairobi under the  guidance of Italian coach Shaleen Ramdoo who was seconded to the country by FIVB.

Cameroon are the defending champions having defeated Kenya in the 2017 edition of the championships.

Here is the final squad that is in Cairo  in search of the African crown.