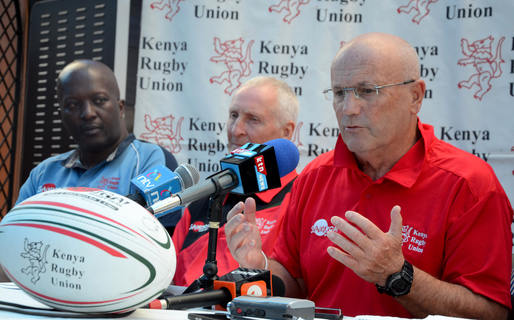 Ian Snook was officially unveiled as the Kenya Rugby 15s head coach on Thursday with his immediate task being to get Kenya into the 2019 Rugby World Cup in Japan. The New Zealand national arrived in the country with his assistant Murray Roulston who will be the defense coach. They will work together with the current technical team led by Dominique Habimana and Team manager Wangila Simiyu.

“I am delighted to be here and I saw this as a new challenge with a team that really has a lot of talent and I was excited about it. I have never been on this road before taking a team to the World Cup, but it is a challenge I am willing to take,” Snook said on Thursday.

The tactician and his assistant take over from South African Jerome Paarwater who left the team last December after spending almost five years. They met with part of the squad during their Thursdaymorning session but it will not be until Saturday that they officially meet the squad.

Their immediate and most important task is the 2019 World Cup Qualifiers which begin in June and the two are confident that this crop of players can deliver the dream despite having only two months to work with them.

“We need to be very clear with how we want to go about things. It is up to us to do the right things over a short period of time to get the most effect. I am confident working with Murray it will happen,” the tactician noted.

Kenya starts its qualification campaign away to Morocco on June 23 before hosting Zimbabwe in Nairobi a week later. They will then host neighbors Uganda on July 7 before hosting Tunisia on August 11 and finishing that off with an away trip to Namibia on August 18.

Despite now knowing much about Kenya save for video footage of their games last year, Snook is confident that he will get things together in perfect piece and deliver a World Cup spot.