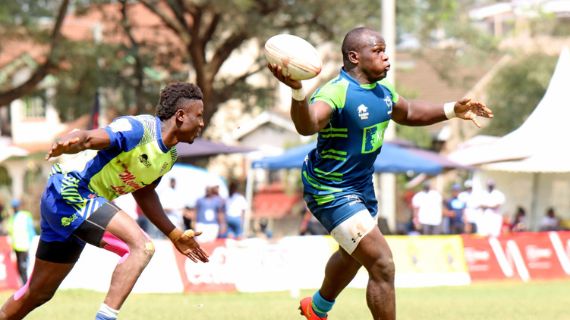 National Sevens Circuit champions KCB returned to the top of the circuit standings after the third round in Mombasa.

Action between KCB and Menengai Oilers at the Christie 7s

National Sevens Circuit champions KCB returned to the top of the circuit standings after the third round in Mombasa.

The bankers relinquished their Driftwood 7s title with a 19-0 loss to Menengai Oilers in the cup semi final but still garnered 17 points after a third place finish to go top on 58 points, five clear of second placed Strathmore Leos who are on 53 points, level with Menengai Oilers but just shading the side from Nakuru on points difference.

Mwamba, cup winners in Mombasa, are fourth on log with 48 points while Homeboyz round off the top five on 38 points.

Catholic Monks lead the second division standings on 44 points, level with Administration Police Warriors while Makueni are third on 39 points as Zetech Oaks ( 34 points) and Shamas (32 points) closing out the top five.

The circuit takes a break this weekend, resuming with the fourth round, the Dala 7s in Kisumu on 2/3 July.