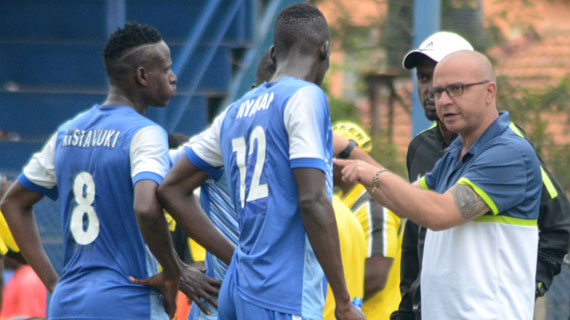 Kenyan Premier League side Nakumatt have officially confirmed American-Egyptian Mellis Medo as head coach after good results since he took over on acting capacity.

In a post on the Club’s Facebook page, Medo landed the job after a good trial. He will be assisted  by Antony Mwangi And Benjamin Omukuba, and Stephen Balozi as The Goalkeeper

We have officially Signed Melis Medo As Our Head coach after A spring of Good Performance During His Time in the Team,

HE will be Assisted By Antony Mwangi And Benjamin Omukuba, and Stephen Balozi as The Goalkeeper Coach,

Melo initially came joined the club as a physical trainer and quickly helped turn around the club’s fortunes.

Club Secretary Albert Wesonga spoke highly of and had hinted the were considering him for the prime job.

“We have seen changes in the club since he came in but with the club licensing rules, we need to have his papers so that we can decide whether or not to make him head coach. We are happy with what he has done in the team,” Wesonga said.

According to his LinkedIn profile, Medo who is a graduate of Political Science, International Relations from the American Military University has a UEFA B License from the FA and an advanced coaching diploma from the United Soccer Coaches (NSCAA).

Nakumatt FC are on a rebuilding mission and have already signed Hurun Nyakha and Joseph Waithira from Wazito Football Club.

After the worst start to the league, Nakumatt FC finally found their footing after local politician Francis Mureithi bought the club to end their financial woes.The club is on a name hunting mission with rumors that they could be renamed to Mt. Kenya FC already in circulation.

In their last five outings, Nakumatt FC has registered three wins, one draw and one loss, results that have seen them move out of the relegation zone and bottom spot where they were rooted for the better part of the first leg of the Kenyan Premier League