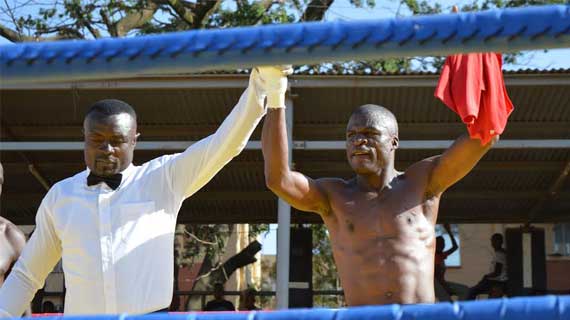 The boxing bout brought business  at the surrounding area  to a standstill with a huge turn-out never seen before. In attendance was Embakasi West legislator George Theuri and other local leaders.

Munika who was widely cheered by the local residents was however stretched to the last  second as Amote  proved lethal and equal to the task throwing  heavy jabs  that saw both boxers end up bleeding profusely in their mouth.

The judges  led by Vedo Okumu handed  Munika the win amid thunderous cheers. In the  Superweight category, Gabriel Ochieng stamped his punching authority to upset John Gitau with a  second round technical knock-out(TKO) while battle hardened James Onyango took four minutes to knock out Ken Oyolo in a  thrilling Superwelter weight category.

Nevertheless, the ladies  bout pitting Everlyn Adero and Susan Andeso  in the  Welterweight category  proved a mouth  watering bout as both traded heavy punches that drew  wild cheers.Adero who showed a lot of resilience was later declared the winner on unanimous points decision.

Earlier at the same grounds,Masa ladies trounced Kenya Homeless Street soccer Association(Khssa)  3-2 to clinch the ladies  tournament that attracted over six teams. Every boxer who participated in the one-day event was awarded with a cash token of Ksh.10,000,courtesy of the California MCA.

The sponsor promised to organize a mouth-watering ladies  soccer tournament during Easter  holiday that will bring foreign teams to spice up the weekend.

Hashim said his aim of organizing  the two events (Boxing and Ladies tournament) was to promote and nurture  young talents. He said he will implore with the area legislator and local leaders  to lay  an artificial turf at the pitch with the assistance  of the CDF money.