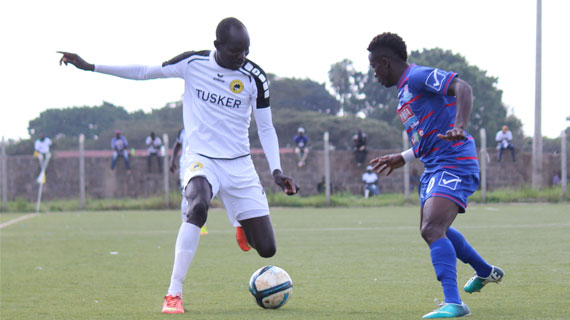 Boniface Muchiri’s  87th minute goal rescued Tusker FC from the jaws of defeat as the 11-time champions held on for a 2-2 draw with Posta Rangers at the Camp Toyoyo Ground on Monday evening.

Posta had come from a goal down with Georson Likonoh drawing them level and Jeremiah Wanjala taking them ahead, but poor marking in their box off a set piece saw Tusker earn a point.

Mike Khamati’s goal off a Muchiri assistance in the first half had given the brewers the lead, but Posta came back a rejuvenated side in the second half to press and get back a result off the match.

In a slow paced first half, Tusker was majorly dominant. Lloyd Wahome, guilty for Posta’s second in the final 45 minutes had the game’s first chance in the second minute when a Khamati cross off the right found him inside the box but his header was saved by Boniface Barasa.

Posta almost snapped their poor start with a goal against the run of play when Likonoh picked a loose ball from range after Tusker had lost the ball in midfield but his shot few inches over the bar.

Tusker were forced into a change after 25 minutes into the game, midfield work horse Hashim Ssempala being stretchered off injured after picking a knock on his ankle and he was replaced by youngster Apollo Otieno.

But Tusker got into the lead on the half hour mark when Khamati’s curling effort from the right off a Muchiri lay off found keeper Barasa napping.

In the second half though, Posta came back a different side and just 10 minutes in, they were level. Peter Nganga was fouled by Justine Omary from 30 yards out and from the resultant freekick, Likonoh curled the ball beyond Duncan Ochieng in the Tusker goal.

Posta were charged with the brilliant start to the second stanza and coach Sammy Omollo brought a fresh pair of legs, scorer Likonoh going off for Kennedy Otieno.

Matano responded with two changes at once, Khamati and Robert Achema coming off for Peter Nzuki and new signing David Juma.

Nonetheless, it was Posta who kept attacking. They were rewarded in the 77th minute much thanks to a mistake from the Tusker defense who stood still waiting for the ref to blow for a foul on Nairuka, but the official waved play on, Dennis Mukaisi storming into the box.

Keeper Ochieng spilled the resultant shot and Wanjala was well placed to tap the ball home.

But, poor marking in their box saw Tusker lose the points when Muchiri poked home after Nzuki had brushed over a corner from Brian Osumba.