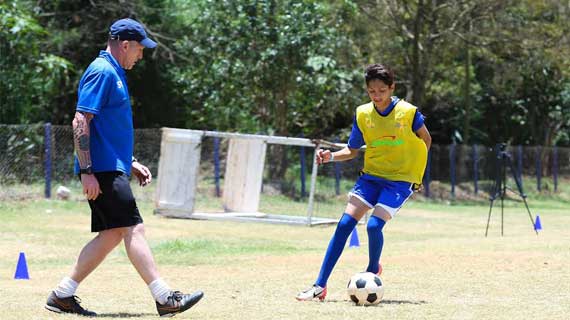 The Safaricom Next Generation has unveiled 75 boys and girls who will join the My Professional Dreams (MPD) Academy, a football talent programme designed to identify and nurture football talent.

The finalists include 57 boys and 18 girls who will be offered coaching, nutrition development, mental exercises, and testing fixtures with professional teams as well as trials at professional football clubs.

The budding stars were selected last year between September and November 2015 during the  Next Generation program that targets to discover talented youngsters aged between 11 and 16 years, from a variety of social classes across the country.

Eight tryouts were carried out across the country, assessing the participant’s skill, speed, fitness, agility and their participants understanding of the game.

According to MPD Academies chairman Terry O’Neill , Some of the seventy five selected players could be selected to travel to Portugal for trials in the coming months depending on their progress

“We are keen on producing a new generation of young professional footballers who will present Kenya both regionally and in world championships. We identified a large number of talented young people throughout the trials and although many of them did not make it to the top 75, it is clear that this country needs more football programmes in order to channel all that talent into good use.” Said Terry O’Neill while speaking during the unveiling of the 75 players in Nairobi on Wednesday .

“Safaricom Next Generation is about offering hope to talented young boys and girls who would otherwise not get this opportunity. We are proud of the youngsters who have succeeded in securing placement into the academy. We believe this programme is going to transform their lives positively as we continue to uplift the sports agenda in Kenya,” said Stephen Chege, Director – Corporate Affairs, Safaricom.

In September 2015, Safaricom Limited announced a one-year, Kshs.50 million sponsorship of My Professional Dream (MPD) Academies, with the aim of identifying and nurturing football talent in Kenya.

MPD Academies was founded in the United Kingdom in 2012 to identify and nurture talent in young athletes from all over the world, and has so far had successful programmes in Dubai, England and Wales. The Kenyan academy is the first full time academy for the brand.