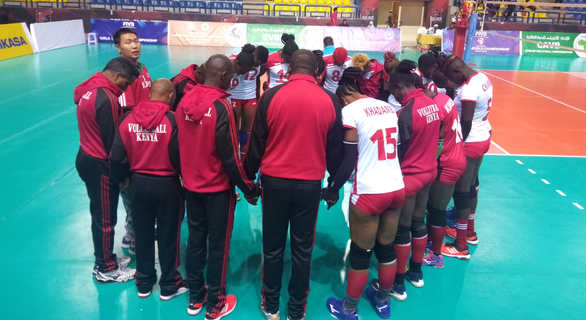 Malkia Strikers skipper Mercy Moim is confident the team will reclaim the African Women’s Nations Championship title they lost to Cameroon two years ago when they vie for this year’s crown in Cairo, Egypt.

The Kenyan queens started their campaign with a straight sets beating of Algeria (25-19, 25-21, 25-21) and Moim believes it will give them the right momentum to get into the competition and clinch the crown at the end of the week-long championship.

“I believe we are able to reclaim this cup. In 2017 we lost just because of some small mistakes but now we are more focused and we have prepared better. Hopefully we will be getting the trophy back home,” the skipper told Michezoafrika.com.

Kenya had won the title for three editions in a row before losing out to eventual winners Cameroon in the semi finals of the 2017 edition held in Yaounde.

This year, the team is confident they can reclaim their lost glory especially with the coming in of Italian instructor Shaileen Ramdoo to boost the technical bench.

Moim says she was pleased that the team started off the competition with a win and she hopes it will earn them the momentum to swing better into the competition.

“It was tough because the first game is always tricky. But as Malkia Strikers, we always aim to win our first match in any competition and I think we did well. We were also not quite used to the heat because it is very hot now in Egypt but thankfully, we managed to get a win,” she added.

On Cameroon; “We watched their first game against Botswana and it is sometimes very hard to judge a team by the performance of their opening match. We will look at them again and analyze their videos to be ready to face them.”

Malkia will play Botswana in their second match of the tournament on Wednesday evening.