MMUST on a fly start at the Great Rift 10's 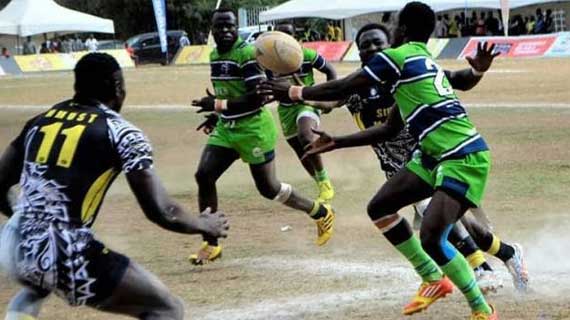 Masinde Muliro University of Science and Technology had a 100%-win rate on Day one of the Top Fry Great Rift 10 Aside tournament after beating their opponents Egerton Wasps, Kiambu RFC and KCB RC 22-0, 24-0 and 12-5 respectively. KCB RC finished second in the Pool with two wins and one loss.

In Pool D, Menengai Oilers were ranked first having registered two wins and a draw while Mean Machine’s crucial 17-14 win over the hosts and the 12-5 win over Makueni saw them finish second in the pool. The much awaited match between Top Fry Nakuru and Menengai Oilers ended in a 5 all stalemate. The fixture had everyone on the edge of their seats in the first half as Oilers went over the whitewash and held on to the 5-0 lead to the breather.

In the second half, the hosts leveled up the scores to 5 a piece; with three minutes left on the clock, an Oilers infringement in their own 22 saw the referee award a penalty to Nakuru. They’d later lose the possession courtesy of the Oilers’ defensive skills, the match ending with the 5 all score. Top Fry Nakuru RFC dropped to the Challenge Trophy Quarterfinal with one win, one draw and one loss together with Makueni RFC who lost all their pool matches.

Resolution Impala Saracens and Menengai Cream Homeboyz RFC finished first and second in Pool A action, both having won two of their matches and drawn one while Nondies and JKUAT drop to the Challenge Trophy. In Pool C action, Kenyatta University’s Blakblad was unbeaten on day one, topping their Pool after their 24-0, 31-12 and 12-5 victories over Moi University, University of Eldoret and Strathmore Leos respectively.

In Division Two Category, the defending champions Top Fry Nakuru II are on course to defending their title after a successful day one. Nakuru were the only team in this Division that did not concede a try having beaten their opponents Meru, KPA Eldoret and Bomet University 19-0, 45-0 and 27-0. They will face Northern Suburbs in the first Cup quarterfinal at 10:00am on Sunday 21st April.

Vihiga Granites, Molo, Citam Kisumu, Administration Police, Stingers and Cooperative University also made it through to the cup quarterfinals.