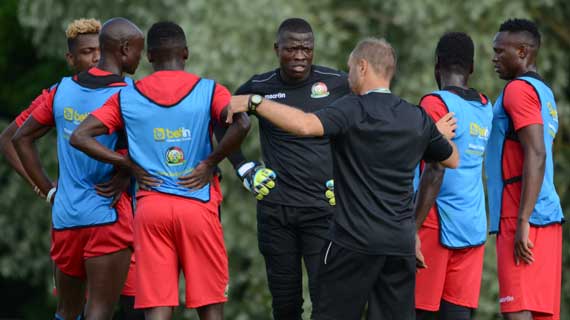 Harambee Stars will face Madagascar in their first of two African Cup of Nations build up matches on Friday night at the Stade Robert Bobin in Paris on Friday as head coach Sebastien Migne looks to firm up his squad for the tournament in Cairo.

Stars have been training in Paris from last Friday and this will be the first time Migne will have to assess his squad on an actual match day.

“It is always good to have friendly matches because I will have some answer. I will be naming my squad of 23 players very soon and it is a chance for me to see what the players can give,” Migne stated.

The tactician says he is happy so far with how the team is shaping up in Paris and believes they have improved over time.

“I am happy that we are all in and everyone is working hard even though it was a bit tough in the first days. We are getting better physically and also tactically. We are on the way but we have to do more,” he noted.

Migne says the biggest aim of having a camp in France is building the team spirit and camaraderie ahead of the Cup of Nations and he has achieved this with a highly guarded and controlled camp in Paris where the players are not allowed to interact with anyone outside the contingent.

Meanwhile, against Madagascar Migne is set to test a new striking force with Michael Olunga set to be rested after only training for one session. Those in line to lace their boots upfront include John Avire, Masud Juma and Chris Mbamba.