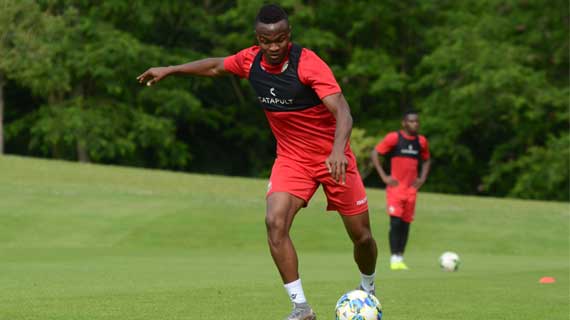 Cliffton Miheso in action at the team's training base in France

Zambia based midfielder Antony Akumu and Portugal based winger Clifton Miheso have been axed from Kenya’s team headed to the African Cup of Nations as head coach Sebastien Migne named his final 23-man squad on Tuesday morning.

Despite being a regular at his club Zesco and playing a crucial role in their CAF Champions League campaign that saw them get to the group stages, Akumu has fallen out of favor with Migne who has instead preferred Ismail Gonzelez and Dennis Odhiambo in midfield.

Miheso has been played as a left back in training and the tactician wasn’t impressed with what he saw. Brian Mandela has been ruled out with injury while Mbamba also picked up an ankle knock in training on Monday evening though he had already been listed as one of the players to be dropped.

The squad to Egypt will be led by skipper Victor Wanyama who plays for English club Tottenham Hotspur who reached the final of the Champions League.

The team has so far played one friendly match and won 1-0 against Madagascar in Paris on Friday. This coming Saturday, the final squad of 23 travels to Madrid, Spain where they will play their final build up match against DR Congo before returning to their base in Paris.

They will play their first match against Algeria on June 23rd  before facing Tanzania in an East African derby and finishing off their group assignments against Senegal on July 1.