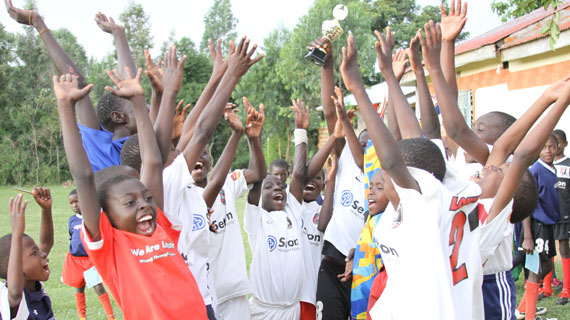 The tournament was sponsored by USA based Andrew Sifunjo who donated balls, uniforms, gloves and boots to participating teams.

Four teams took part in the tournament with the Michezo Afrika Academy winning the final match 1-0 against Bidii soccer club from Luyekhe.

While speaking during the trophy ceremony, tournament sponsor Andrew Sifunjo who is based in New Jersey thanked the Michezo Afrika academy for the contributions towards uplifting the standards of soccer in the region and for keeping the youths occupied during their school holidays.

“This is a region known to produce top quality players and I am happy to be part of this program. The young ones have enjoyed themselves and one can note their passionate involvement in the game. I am more excited to see parents coming to cheer their boys.” He noted.

Sifunjo further urged the players to work hard in school in order to come out as all round students who can compete for high grades in order to join top quality universities.

He also donated books and pens to the students ahead of their return to school next week.