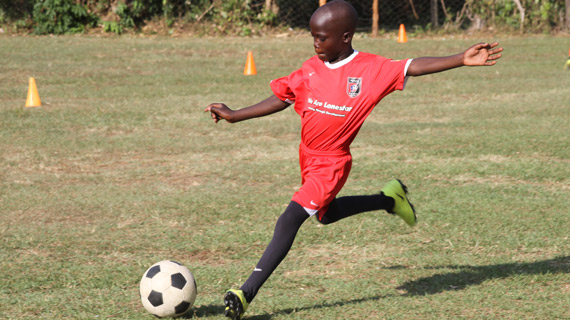 The Michezo Afrika Academy U-11 soccer team on Sunday played to a barren draw against Webuye FC Juniors in a friendly match played in Webuye.

This was the first meeting between the two teams and an opportunity for the youthful team based at the Michezo Afrika center in Bungoma to travel and explore their potential.

Speaking after the match Michezo Academy senior coach Douglas Simiyu said, “It was a good opportunity for the boys after many weeks of training. They were all excited not only to play in a friendly away from their usual surroundings but they were happy to have travelled out of town.”

Simiyu added that there are plans to engage the team in more friendly matches  that will expose the young lads to stronger opposition as a way of strengthening their potential, “ We plan to have more of such friendlies in the coming weeks.”

The team trains at the Bungoma Sports Club every weekend .