Micheal Olunga ends season with a brace and assists for Djurgarden 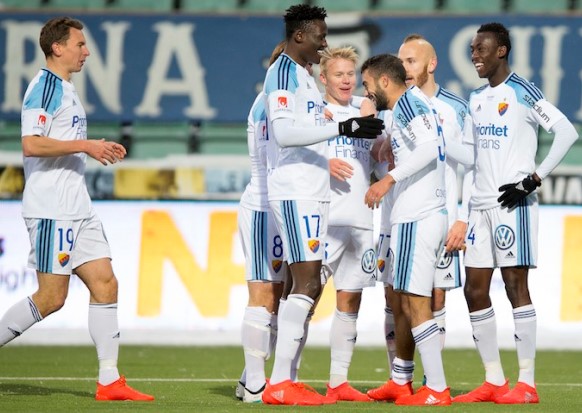 Micheal Olunga ends season with a brace and assists for Djurgarden

Micheal Olunga's star continued to shine in the Swedish league after his brace helped Djurgården cruise to a 5-2   victory over GIF Sundsvall in a season ender match at Norrporten Arena on Sunday 6th November.

During the match, the hosts took the lead nine minutes into the game through Noah Sonko Sundberg but engineer Olunga replied four minutes later with a cool finish off Tino Kade’s assist.

Compatriot Othman El Kabir gave Djurgårdens  the lead in the 36th minute, his first goal of the season.

The evergreen Olunga hit ten minutes after the breather to give Djurgården 3-1 lead but Peter Wilson replied five minutes later for Sundsvall to make it 3-2.

Olunga then turned provider, first setting up Zimbabwean Tino Kade Werewolf  in 70th minute then Magnus Erickson who put the icing on the cake with a 5th goal in 84th minute.

In his maiden season, Micheal Olunga played for 1732 minutes from 27 appearances, 18 in the starting lineup for the Djurgården. He was handed yellow cards thrice.

He was the club's top scorer and finished fifth best scorer in the Allsvenskan league.

“Thank you God for the goals tonight and for finishing  my first season at DIF.I want to thank my fellow players for all the effort we put together. The fans  for their dedication towards the team and support,without you we couln’t have made this far..,” wrote Olunga on his Social Media page after the match.