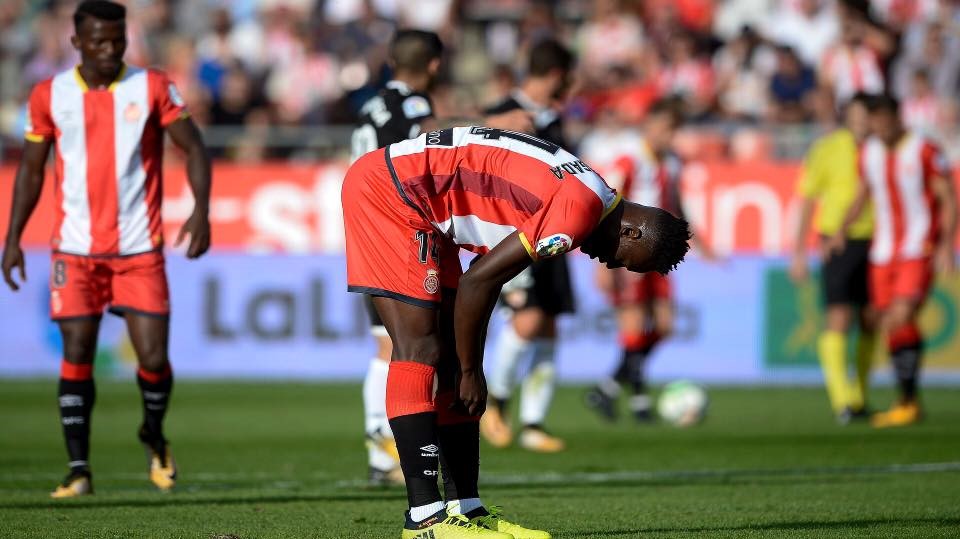 Olunga in past action/ @GironaFCoficial

Interestingly, it was Girona who took the lead in the third minute with Portu capitalizing on shaky defending from Samuel Umtiti.

Barca’s response was delivered two minutes later with Suarez beating the keeper from a Messi feed. At the half hour mark, the Argentine cut through three Girona defenders before unleashing a low left foot shot past a dejected Girona custodian Bounou.

In the 37th minute, Barcelona won a free kick and Messi unleashed his unpredictable trickery by slipping the ball below the jumping wall to make it 3-1.

Messi was involved in the build up to the fourth goal by serving Coutinho who left if for Suarez to finish. Countinho also registered his with a brilliant curledd shot on minute 66th.Suarez capped it all with a hatrick in the 76th minute after combining well with Dembele.

Kenyan international Micheal Olunga did not make it even to the substitute bench.He featured in the first match against Barcelona.

The 23-year-old Kenyan has so far bagged 311 minutes of Liga playtime, three starts and six as a substitute and has three goals to his credit.