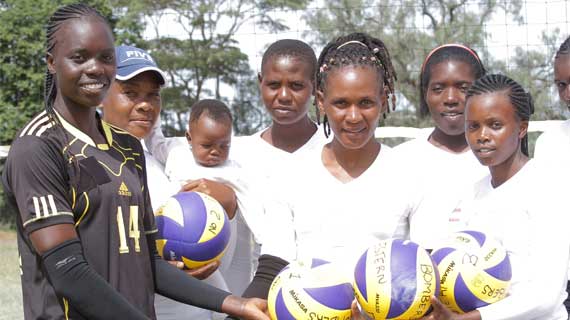 Kenyan international Mercy Moim last weekend made a pledge to support the growth of Western Bombers, a Bungoma based side that made their debut  appearance in the national women's volleyball league this season.

Moim, who also hails from Mount Elgon in Bungoma County donated balls to the team  and made a pledge to supply the team with more training equipment. The balls were presented to the team on Saturday during the Laikipia Governors Cup held in Nanyuki.

"I am very proud of this team and your growth  makes me happy. I want to pledge my continuous support to the team because I understand the challenges that at times face you especially in training. We are all encouraged by your talents and  I would personally love to see more of young players in  the region get a chance to join you and shine at this national level." Moim said in her remarks.

"Success in Volleyball requires a lot of  self discipline and determination which we have seen in your performance and we urge you to keep up the team spirit." She added.

Western Bombers reached the quarter finals of the tournament in Nanyuki losing 3-1 to Kenya Pipeline.

In their second outing this season after the Amaco Tournament in Eldoret, Western Bombers, managed by former international Silas Cheren, picked two wins having defeated MKU  3-0 ( 25-10,25-15 and 25-20) for their first league win this season.

The team is coached by former international Dorcas Nandasaba who also plays as a lead motivational attacker.