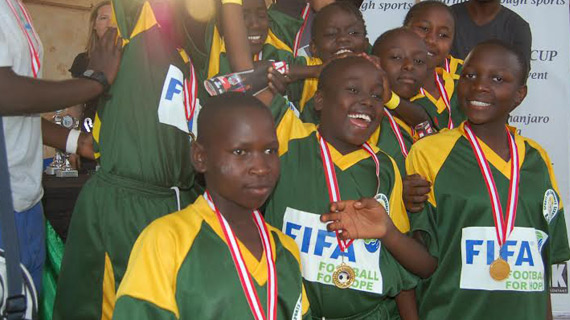 Mathare Youth Sports Association U13 boys’ team and U13 girls’ team won gold medals at the just concluded East Africa Cup. MYSA had two football teams for this year. The boys team won 1 – 0 against Msimamo Youth in the finals, while the girls team thrashed Right to Play 5 – 0, both teams are from Tanzania.

In the U16 category, Moshi Local A beat KPL select side 1 – 0 while Moving the Goal Posts from Kilifi, Kenya beat Buguruni Youth Centre 2 -1 on post-match penalties. Besides soccer this year’s event involved volleyball and sitting volleyball.

This year’s event attracted 88 teams with over 1,700 participants from Kenya, Uganda, Tanzania mainland, Zanzibar, Rwanda, Zambia and observers from Mozambique and Norway, the biggest ever in the history of the event.