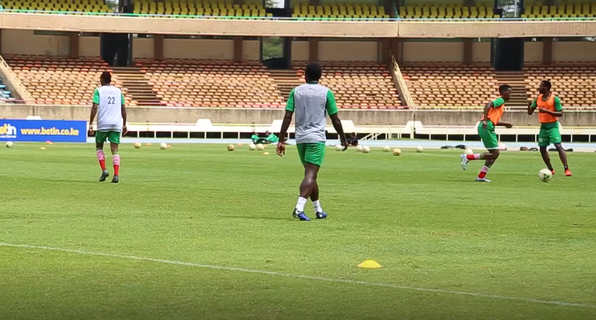 Defender Musa Mohamed and striker Masud Juma were part of the team on Monday as Harambee Stars took in their first training session ahead of next month’s African Cup of Nations. Migne will have two training sessions this week with a group of local based players both in the AFCON and CHAN squads.

Musa’s season has come to an end in the Zambian top flight with Zesco United while Masud hasn’t been active in Libya due to the political situation. His inclusion in the team has drawn sharp criticism because of this factor especially noting it is at the expense of Jesse Were who is on form in Zambia.

Also part of the squad on Monday was former Sofapaka and Thika United winger Clifton Miheso who is based in the Portuguese second tier.

The team is gearing up for a three-week camp in France, and the team is scheduled to jet out to Paris, on May 31.

While in France, the team will also play two friendly matches against Madagascar on June 7, and the Gambia a week later, on June 15.

Kenya will play her Group C AFCON matches at the 30 June Stadium in Cairo. The first match will see Stars face Algeria on June 23. Tanzania will be up next on June 27, before Harambee Stars wind it up with a match against Senegal on July 1, 2019.