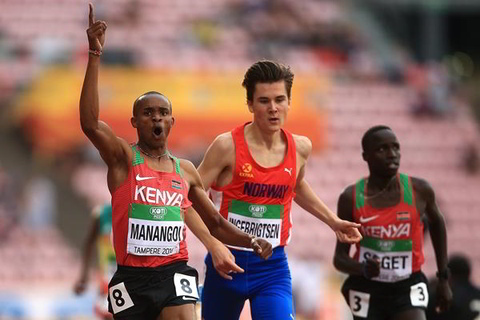 Manangoi added to his collection of world titles as he went past Norway's Ingebrigsten to put Kenya on top of the charts at the U20 IAAF World Championships in Tampere, Finland

George Manangoi won the third gold medal for Team Kenya to add to his World U18 title when he outran his closest rivals in the men's 1500m final at the World U20 Championships ongoing at Tampere Stadium in Finland.

Manangoi won in a toughly fought pack that saw Samuel Tefera take the lead in the first lap before surrendering the lead to Kenyan Soget. Soget did not hold it for long as Ingebrigsten took his turn to lead the pack.

Manangoi maintained his pace and finally shot to the front going past fading Tefera, Soget and Ingebrigsten for gold.

Britain's Jake Hayward sped past a number of fading athletes towards the end but he came in late to get into the medal bracket, thus finishing fourth before Tefera.

Kenya will be looking to add to the medal basket when defending champion Cilliphine Chespol and Mercy Chepkurui compete in the women’s 3000m Steeplechase final.

Kenya now tops the medal standing after Day 3 with three gold medals and 1 bronze ahead of Japan and Jamaica who have 2 gold 1 silver and 1 bronze a side.