Madoya regains lead to set up exciting final round at Muthaiga 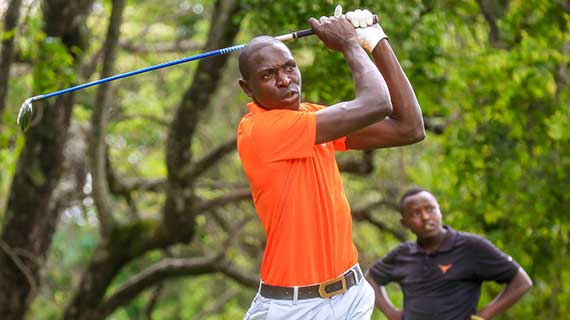 Great Rift valley's Jastas Madoya shot a round of 3-under par, 68, to see him regain the lead at Muthaiga Golf Club, on a gross score of 3-over par, 216 after the third round of action.

The ABSA sponsored Madoya who had relinquished the lead to Greg Snow after the second round, shot two birdies; on the par-5 fourth and par-three fifth, while dropping one shot at the par-3 second in the front nine, for a turning score of 1-under par, 35.

Further birdies at the tenth, fourteenth and eighteenth coupled with a sole bogey at the twelfth, saw him return a round score of 3-under par 68.

Speaking after his round, Madoya highlighted his strong putting as one of the reasons behind his strong showing. "I played much better today, my putting improved from yesterday, and I hope I can play the same tomorrow, post an even better score and eventually win the tournament." He said.

Overnight leader Greg Snow failed to recover from an opening pair of bogeys at the first and second, dropping further shots at the fifth and seventh in the front nine. A birdie at the tenth followed by three scores of par in the next holes seemed to have halted the slide, it was however short lived, as he dropped another shot at the par-4 14th and compounding his woes with a double bogey on the 18th, for a round score of 6-over par, 78, to see him drop three places on the leaderboard on an overall score of 6-over par, 219, three shots behind Madoya.

The day's best score came from Golf Park's David Wakhu, who carded a score of 4-under par, 67, off a strong display in the front nine, which bagged him four of his five birdies in the round, taking his gross score to 5-over par, 218, in second place alongside Thika Golf Club's Simon Ngige who shot a round of par.

The stage is set for a pulsating finish to the eighth leg of the 2019/20 Safari tour, with up to eight players with a realistic chance of claiming the title in Muthaiga, the battle for the amateur silver salver is also set to go to the wire with Mutahi Kibugu and Daniel Nduva tied in 7th place on a gross score of 7-over par, 220.

Round four action will tee off at 7:30 AM on Wednesday .