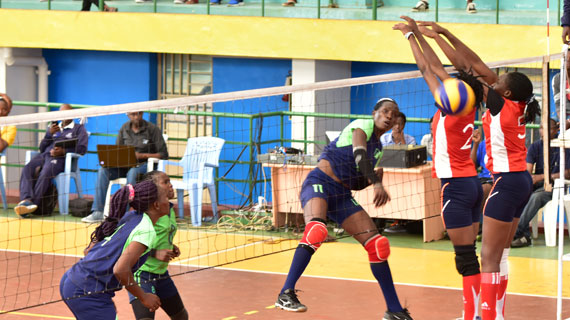 With her incredible form throughout the tournament, KCB’s 22-year-old Miligreen Lutuvula was crowned the best attacker as the 2018 Genocide Memorial Tournament ended at Amahoro in Kigali Rwanda on Sunday 10th June 2018.

In their opening match, the bankers edged Rwanda’s Ruhango 3-0 followed by another stellar form against Rwanda’s Revenue Authority in a pulsating clash that lasted 2 hours. The third match of the day saw KCB edge out Kigali Volleyball club 3-1.

The Bankers underlined their performance in Rwanda with an emphatic 3-0 win over defending champions APR of Rwanda in the semi finals on Sunday morning.

In the men’s competition Gisagara Volleyball Club were crowned champions after defeating Rwanda Energy Group, REG, in straight sets in the final at Amahoro Indoor Stadium.

On top of the trophy and medals, the winners in both men and women’s category took home Rwanda Francs 1,000,000, the finalists walked away with Rwf 600,000 while the second runners-up RRA and UTB bagged Rwf400,000 apiece.