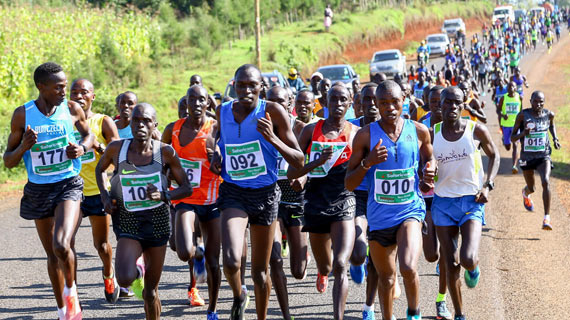 Leading pack during the 2017 Iten Road Race that is part of the Safaricom Athletics Series.

Joram Lumbasi  is the winner of the 2017 edition of the Iten Road Race that took place in Elgeiyo Markwet County last weekend .

Lumbasi , who is the Family Bank Half Marathon Champion walked home with the 10Km Road Race after posting a time of 28:18.9.

Closely in second place was Gilbert Masai who clocked 28:20.7 and Emmanuel Bor who finished in third place with a time of 28:28.9.

Berlin Half Marathon Silver Medalist Edith Chelimo led the women with a time of 32:06.7 followed by Valary Ayabei at 32:51.5 and Dorcas Jepchirchir at 33:15.0.

About 500 athletes participated at the 8th edition of the annual event which received Sh 1 million sponsorship from Safaricom bringing the total sponsorship for this race to almost Shs 7 million over the years.

The 10km Road Race was launched by elite marathoner Lornah Kiplagat in 2002 to celebrate the anniversary of her High Altitude Training Centre which has hosted the likes of World Champions Abel Kirui, Florence Kiplagat and Edna Kiplagat and Olympic Medalists Asbel Kiprop and David Rudisha.

“The race was successful and happened as planned. We got athletes from many parts of the country and are proud of the new crop of athletes that emerged victorious,” said Kibet Biwott, the race organizer.

Winners of this year’s Iten Road Race walked away with Sh.40,000, in both the men’s and women’s races.

Other races in the Safaricom Athletics Series include: Ndalat Gaa Cross Country, Madoka Half Marathon, Imenti South Road Race and Kisumu Town Marathon, which will wind up this year’s edition in December.