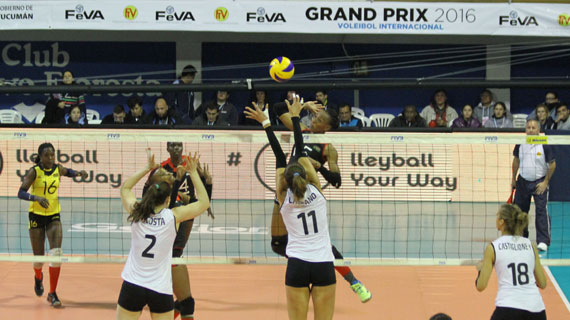 Kenya fell 3-0 (25-22,25-21 and 25-13) in an exciting encounter that saw Kenya take an early lead of 8-6 by the first technical timeout.
Coach Lung’aho started with Jane Wacu, Brackcides Khadambi, Noel Murambi, Mercy Moim Violet Makuto and Trizah Atuka in his opening formation, starting off with a good attacking play that stretched them to an early three-point gap. Kenya led 8-6 by the first technical time out.

However, with two successive intelligent dummies by Argentine Yael Castaglione, the hosts pulled away from 13 ups taking the lead for the first time in the match at 15-13. Josephine Fernandez and Emilce Sosa had brilliant finishes for the host team who won the set 25-22.

The second set was equally competitive with Kenya taking an early lead. Coach Lung’aho brought in Janet Wanja for Jane Wacu and Esther Wangeci for Makuto but the Argentines could not surrender their lead despite a good push from the Kenyan attack force led by Khadambi , Atuka, Moim and Murambii. The Guillermo Orduna led squad held their nerves to win the set 25-21.

Kenya committed many errors at the start of the third set losing concentration and communication to allow Argentina easy points and a quick gap of 6-1.

The Argentines took advantage and grabbed control of play to convincingly win the third set 25-13, a result that ensured they bagged their opening maximum points on day one of the Group Two action in front of their fans in Tucuman.

Speaking after the match, the Argentinian coach Guillermo Orduna said, “We committed a lot of errors but Kenya also played very well in the first two sets.”

Kenya captain Mercy Moim congratulated Argentina for a good play saying, “We tried our best today and our performance was far much better than ten way we played against them in friendly matches. We will now immediately shift our focus to the next match and hope to improve with better results.”

Kenya will take on Bulgaria on Saturday evening while the hosts Argentina play Dominican Republic.