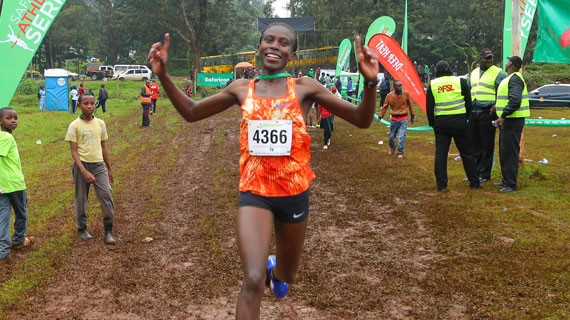 Over 3,000 athletes participated in this year’s Henry Wanyoike Hope For The Future Run Road Race

Ruth Karanja the winner of the 8th edition of the Henry Wanyoike Run for The Future race senior’s women category crosses the finishing line after she ran 8 KMs and clocking a time of 29:41:10.

Rhonzas Lokitam and Ruth Karanja won the senior men and female categories during the annual Henry Wanyoike ‘Hope for the future “marathon held at the Kikuyu township,Kiambu County last weekend.

Lokitam beat a large field of over 30 runners to win the senior men’s category with a time of 25 min,24.06 sec. The 22 year old was followed closely by Kamau Wangui with a time of 25min,25.06 sec while 27 year old Robert Ndiwa who won last year’s  event was relegated to third spot after clocking 25.29.10 sec.

In the seniors women category. 25 year old Ruth Karanja emerged the winner after clocking 29min,41.10 sec followed by Judy Cherotich(30.08.10 sec) with Esther Waweru settling for third  spot after  hitting the tape with a time of 30min,10.40 sec.

Coached by Sammy Kitwara,Rhonzas who trains at Ngong said his options are wide open and was ready to feature in any event whether local or International  as advised by his trainer.Last year, he featured in the Hamburg and Valencia marathon as pacemaker where he  finished  third and won the  latter’s event. He termed the race as competitive and promised to defend his title  next year.

Over 3,000 athletes took part in the road race which was flagged off at Kikuyu under the theme ‘Peace and Cohesion’.

The annual race which is the brainchild of Paralympian athlete Henry Wanyoike has been sponsored by Safaricom to the tune of KES 1 Million.

The funds raised from the run supports various community projects such as student bursaries, feeding programs and income generating projects for persons living with disabilities.

“Last year we raised KES 3M which was used to acquire 50 white canes for the visually impaired and 100 wheelchairs that were distributed to secondary schools in the community. We also supported a nursery school and an athletics club,” said Henry Wanyoike, world record holder and founder Henry Wanyoike Foundation.