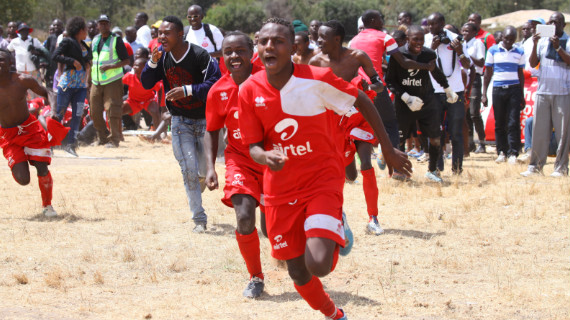 Daniel Likoko put up a man of the match performance to literally hand Passenga a maiden KSSSA boys football national title as the side from the Aberdares region shocked pre-match favorites Laiser Hill 1-0 in an exciting final played at the Machakos School on Saturday 1 August 2015.

Laiser Hill would respond with relentless attacks, dominating play in midfield and surging forward time and again. Chamla Flavious, Musa Masika and Kennedy Mwangi all had scoring chances but had to contend with an inspired Likoko in the Passenga goal who dealt with everything thrown his way. They were also twice denied by the woodwork.

The score would remain 1-0 at the interval and when the second half resumed, it was a script similar to the first half, Laiser Hill doing all the prodding, Passenga soaking up the pressure.

Indeed Passenga looked comfortable sitting back but remained dangerous on the counter attack. Avire came close to adding a second, his shot sailing just wide of the posts after 62 minutes.

Masika would release a fierce shot that was gathered by Likoko. Laiser would put the ball in the back of the net moments later but Sejero’s effort was ruled out for offside.

The final whistle would blow moments later, Passenga creating history as the first ever side from Aberdares to win the national title.