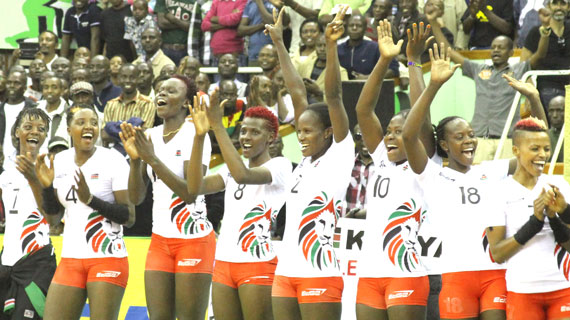 The National Olympics Committee of Kenya on Friday boosted the national women’s volleyball team in Cameroon for the Rio 2016 Olympics qualification tournament with a three Million Shillings  grant.

The is expected to help the Kenya Volleyball Federation clear the debts they incurred before the team left for Yaoundé, Cameroon for the qualifiers. The government is however yet to disburse the Sh7.6m- the approved budget for Malkia Strikers' trip expenses- three days after departure for the continental show.

KVF's vice president Martin Makokha, said the funding will greatly help the federation clear the debts it has accumulated ahead and during Malkia Strikers' outing.

“This money will help us offset the costs we incurred during preparations for this tournament together with bills in Cameroon. We are grateful as a federation,” said Makokha.

Makokha assured that the girls are up to task despite being grouped with strong teams (Tunisia and Cameroon).

“We are in a tough group and we know they are also worried about us. It is just a matter of who is more focused, which team will settle down earlier than the other, and we are confident because these are teams we have met before,” said Makokha.

“It is going to be a tall order beating Cameroon at home," he added.