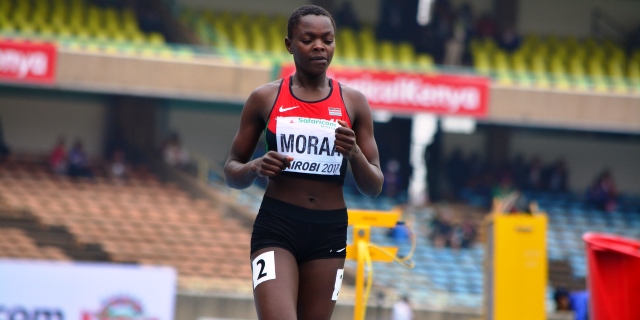 Kenya’s Mary Moraa clocked a personal best time of 1:56.71 to settle for bronze in the women’s 800m final at the World Athletics Championships in Oregon on Monday 25 July 2022, edging Ethiopia's Diribe Welteji who also ran her best time of 1:57.02.

American Olympic champion Athing Mu added the world 800 metres title to her resume as the 20-year-old showed experience beyond her years to cleverly squeeze out Briton Keely Hodgkinson in a breathless neck-and-neck finish.

Mu took up the running with 300m to go but Hodgkinson, also second behind her in the Tokyo Olympics, went with her and when the American drifted slightly wide on the inside lane coming into the home straight the Briton, also 20, half-squeezed into the gap and looked set to go past.

Mu though, fairly and gradually, eased back across and kept her shoulder and pumping elbow in front of her rival, shutting the door to take the tape in one minute, 56.30 seconds, with Hodgkinson second in 1:56.38.

Earlier on, Jacob Krop had collected Kenya’s fifth silver medal when he finished second in the men’s 5000m behind Norway’s Jakob Ingebrigtsen who made up for his 1,500 metres disappointment by winning in emphatic style.

Ingebrigtsen came home in 13 minutes, 09.24 seconds ahead of Krop of Kenya who timed 13:09.98, while Uganda's Oscar Chelimo found a home-straight burst to take bronze in 13:10:20 after American Grant Fisher had looked set for a medal until being tripped with 90m to go.