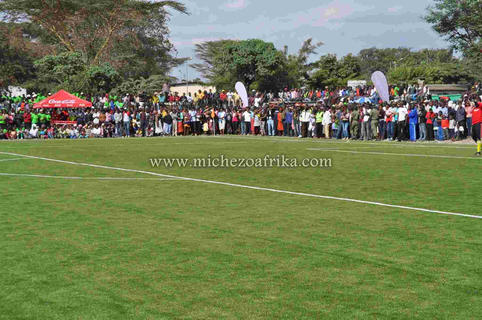 The league managers this afternoon announced that Nairobi’s Camp Toyoyo and Ruaraka Complex as well as Thika Stadium, Chemelil Complex and Mumias are not fit to hos any top tier game.

“The Committee has made its recommendations and reasons why they are banning the five stadia and a report will be filed soon. We decided to announce it early before the report so that clubs can plan themselves accordingly,” KPL CEO Jack Oguda said.

Nairobi based clubs will be hardly hit by the news as they were over reliant on Ruaraka and Toyoyo with Nyayo closed. This will now mean that Kasarani and Machakos will be overloaded and might in the long run destroy the surfaces especially with the rains.

Tusker will meanwhile alternate between Kasarani and Machakos with their Ruaraka complex out. They had plans to move to the Kinoru Stadium in meru but the same is closed as they are working on the playing surface.

There is no news as at yet when Nyayo will be available for football as it has only been renovated to host Wednesday’s Jamhuri Day.

Vihiga United who were using the Mumias Complex have since shifted to the Bukhungu Stadium in Kakamega.

Coaches and players had been complaining especially about Ruaraka and Thika with several players having suffered injuries from the uneven grounds. Toyoyo’s turf has been ageing out while the size of the pitch has also been questioned.

There have also been concerns about security around the facility located in nairobi’s Jericho estate.