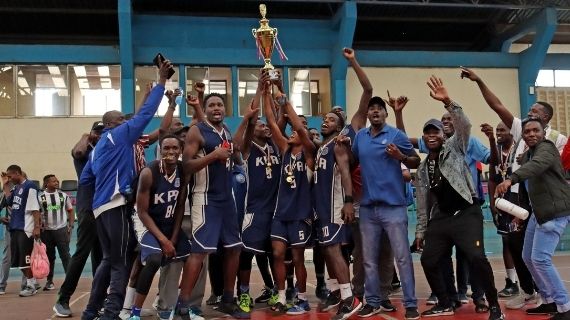 Heading into the decider though, KPA were in no mood to let their guards down.

Kenya Ports Authority has swept both the men and women’s national basketball titles after the men’s side gunned down Ulinzi Warriors 80-61 in Game Five on Monday to clinch the title. The women’s team had earlier beaten Equity Hawks to clinch the crown and now, the men’s side completed the sweep.

The final had been delayed due to a case between KPA and Equity Dumas over a contentious game five which Equity lost in Mombasa in the semi-finals.

However when it was finally resolved and KPA’s passage to the final was confirmed, they showed it was no fluke by edging out Ulinzi 3-2 in the best of five series.

Games One and Two were staged in Mombasa, the tie evening at 1-1. Heading into Nairobi this weekend, KPA won game three to go 2-1 up, but Ulinzi forced game five after winning on Sunday in Game four.

Heading into the decider though, KPA were in no mood to let their guards down.

Job Byron put up a scintillating performance for the dockers, clinching 19 points and adding on seven rebounds while Ken Wachira and Tobias Odhiambo both had 15 points to their names. Wachira, who was named the Most Valuable Player also had nine rebounds to his name.

Ulinzi’s James Mwangi led the way for the soldiers with a double double, hitting 17 points and 14 rebounds.

The dockers had their feet on the gas from the start and led 26-19 at the end of the first quarter and grew on to a 41-32 lead at halftime.

KPA totally dominated the third quarter and with 5:00 gone on the clock, they had established an 18-point gap with Wachira’s clutch three-pointer underscoring their prowess.

Ulinzi called a time out with 4:27 to play but it did little to reduce the damage as KPA established a 20-point gap heading into the last quarter.

The soldiers outscored KPA in the fourth quarter 18-17, but it was too little too late as the damage was long done.