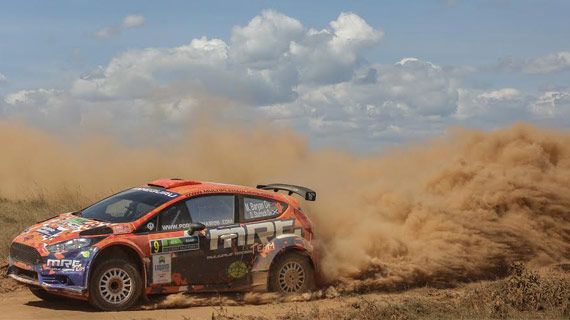 Econet Media’s TV channel Kwesé Free Sports is launching live broadcasting of Kenya’s motor sport rallies, with its first broadcast due to be aired on November 6th from the KCB Rally at Kajiado.

The launch is a first for Kenya and for Africa in opening the country’s rising rally sports industry to national TV audiences across the continent.

The rally broadcasts will be live-streamed in partnership with Liquid Telecom Kenya, which developed the streaming capacity as part of its rally driver sponsorship program, and launched rally live streaming onto its own YouTube platform in July 2016.

“This has since seen us roll out state-of-the-art timing equipment, create live streaming of the rallies, and now conclude this new partnership with Kwesé Free Sports that will mean Kenya’s rally sports events reach a mass audience.”

“We are excited to be bringing the rally coverage live to fans in Kenya,” said Monicah Ndung’u, General Manager Kwesé Free Sports TV.

“Little attention has been paid to motor rallying in Africa: we want to  bring it to the forefront by offering quality, timely, and convenient broadcasts to fans in Kenya,” she said.

The broadcasting of the Kenyan rallies follows an 18-month development project by Liquid Telecom Kenya, which has seen the Internet Service Provider invest in high-speed, mobile Internet connections and filming equipment, aerially and inside rally cars, in order to raise the sport’s profile.
“Seeing the Kenyan rallies now moving onto live TV in Kenya is a  fulfillment of our opening objectives in sponsoring Ian Duncan and the Rally Chix led by Tash Tundo,” said Statham.

“Our mission was to align this sponsorship with Liquid Telecom’s overarching vision of achieving permanent transformation in every aspect of African life through the innovative deployment of Internet  infrastructure and services.”

The KCB Safari Rally dates back to 1953, and over the last 60 years, has featured leading East African and international rally drivers. However, until the development of the live streaming, it has been viewed by only a few thousand spectators at each rally.

“The KCB rally is part of our heritage and one of the most exciting  rallies on the globe in route and action, making this a breakthrough for Kenyan sports coverage,” said Statham.