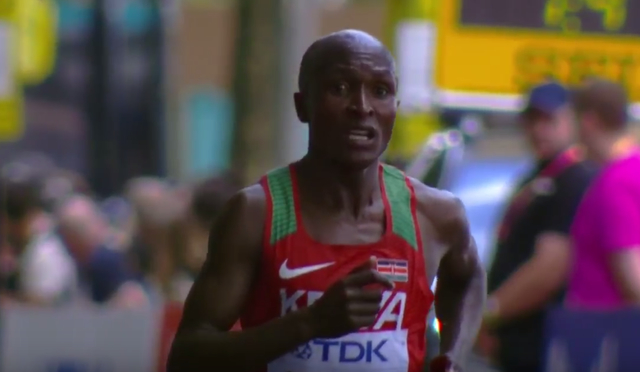 Kirui shrugged off stiff competition from Ethiopian Tamirat Tola to bag the gold in a time of 2.08.27. Tola who was the favorite had to struggle in the final 50m to finish ahead of Tanzania’s Alfonce Simbu won the bronze.

Tola led at one and a half hour with a comfortable gap but was overtaken by Kirui just fifteen minutes later.He clocked 2.09.49 while Simbu managed 2:09.51.

Prior to the gold ,Kenya had two bronze medals.Paul Kipngetich Tanui won bronze in the men's 10,000m race won by Mo Farah while Agnes Tirop achieved the same feat after finishing behind Alzama Ayana and Tirunesh Dibaba in the 10,000m respectively

During the morning session heats, the trio of Ezekiel Kemboi, Conseslus Kipruto and Jairus Birech made it to the 3,000m Steeplechase where they will face stiff competition from Evan Jager of USA and Mahiedine Mekhissi of France.