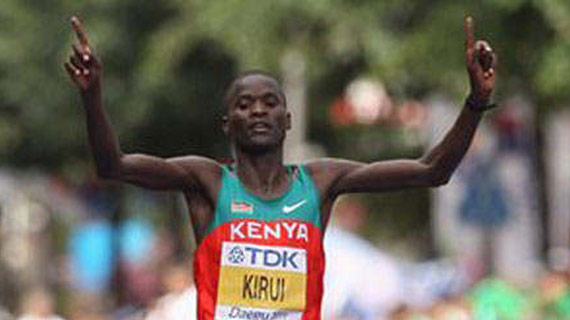 “I have already started my preparations for the IAAF World championships in London and I am optimistic that I will make the cut in marathon for the competition,”Kirui said.

He said he will use the London marathon in April to post better time performance in order to enter into the team.

“First I want to run in London marathon to get good time. This will enable me enter into the team for marathon where I will be seeking my third title in the world championships,”Kirui added.

He represented Kenya at the 2012 Olympics in London getting a silver medal after Uganda’s Stephen Kiprotich stole the show in the last kilometres to win gold.

“This year I didn’t make to the Rio Olympics because of injury which I was able to overcome. You can see how I achieved Chicago marathon this year after a tough battle, “He explained.

His 2:05.04 personal best he clocked in third at the 2009 Rotterdam marathon ranked him the sixth fastest ever marathoner.

The time was an improvement of  the 2:06.51 he set at the 2008 Berlin marathon where  he finished second after pushing Ethiopia's Haile Gebrselassie to a world marathon record.