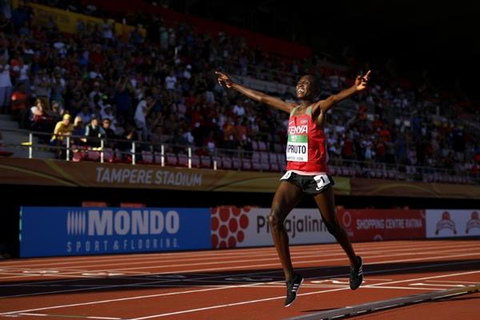 Rhonex Kipruto, 18, was in stunning form to give Kenya the second gold medal, moments after Beatrice Chebet had given the first in 10000m and 5000m races respectively in Tampere, Finland

Rhonex Kipruto wins the 10,000m at the IAAF World U20 Championships Tampere 2018 to give Kenya the second gold medal PHOTO | IAAF | COURTESY

Kenya's teenager Rhonex Kipruto was on fire as he produced a world-class performance to win the 10,000m race at the World U20 Championships going on at the Tampere Stadium in Finland.

This was Kenya's second gold at the championships after Chebet had fought earlier on to write history for Kenya after winning the 5000m women race at the same venue.

The 18 -year -old Africa junior cross-country champion Kipruto was competing against a strong side that included a Kenyan counterpart and Uganda's finest Jacob Kiplimo as well as Ethiopia's Berihu Aregawi.

In a post-race interview, Kipruto said, “I’m very happy, it was a great day. It was an honour to represent my country and my people. The competitors were tough but I was able to stay focused.”

Uganda's Kiplimo (Jacob) won a silver medal in the same race finishing in a time of 27:40.36 behind Kenya's Kiplimo (Rhonex) who set a new Championship record at 27:21.08. Aregawi (Berihu) from Ethiopia finished third to take bronze clocking a personal best time at 27:48.41. Solomon Kiplimo Boit also from Kenya finished fourth in the race.

Kiplimo from Uganda had taken a lead from the 1000m mark but lost his lead to Kipruto after only 10 laps. From then on Kipruto put on a stunning display to win the race and setting the Championship record

Earlier on, Beatrice Chebet had given Kenya their first gold medal at the Championships when she won the 5000m race among women.

Chebet fought hard to put on a personal best of 15:30.77. Chebet had finished fourth in the 3,000m at the World U18 Championships and had made two attempts for silverware in vain. Her second attempt came early this year in March where she finished ninth during the Africa Cross Country Championships.

It took this third attempt at the World U20 Championships in Tampere, Finland for the teenager to land the first gold medal for Kenya. She was followed closely by two Ethiopians Ejgayehu Taye (15:30.87) and Girmawit Gebzhihair (15:34.01)