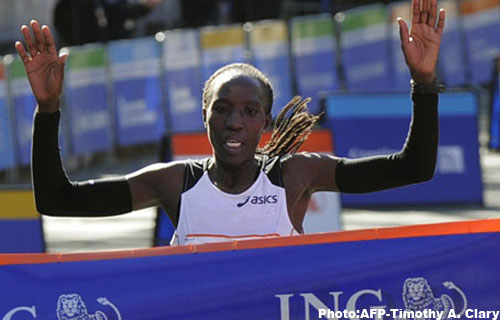 Edna won the 2011 and 2013 World Championships marathon titles in Daegu and Moscow entering into the books of history for achieving back-to-back wins at the world championships.

She now intends to represent Kenya at the August’s world championships in London and she ha s already started her preparation.

“I am praying that I will get a chance to represent Kenya but I have to train and prove my worth this season,” She said.

Edna who started last month preparing for Boston hopes to use the event to get the best performance that will catapult her to Team Kenya for the world championships.

“I have just started my training and I don’t want to say anything about Boston now but I am aiming for the best,” she added.

The athlete who first represented Kenya in 3000m getting silver and bronze medals at the 1996 and 1998 World Junior championships in Sydney and Annecy respectively placed second at the Chicago Marathon in October.

Despite her good form last season, she was left out in the team for the Rio Olympics however she went ahead to finish second at the  Chicago marathon.

In Boston she will battle with the year 2015 Berlin Marathon winner Gladys Cherono and Caroline Rotich who won Boston in the year and the defending champion Atsede Baysa of Ethiopia.

Edna boasts of London, New York and Los Angeles victories together with the Abbot World Marathon majors title for the 2013-2014.