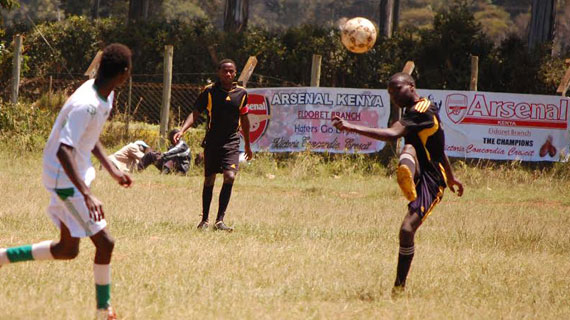 The tournament brought together Arsenal Fans Clubs countrywide for the annual tournament.

Kiambu kept a clean sheet in the pool matches as no team scored against them but advanced to the finals having displayed good form.

Kiambu beat ElgeyoMarakwet FC 4-2 in penalty shootouts after a barren draw in the regulation and extra time.

With solid defenses and vibrant forward in both teams, they held each other but missed minimal scoring opportunities they created.

The game ended 0-0 forcing the centre referee to force for a penalty shootout.

To advance to the finals, Kiambu beat Nairobi 3-0 while Elgeyo Marakwet booked a ticket through 8-7 penalty shootouts score margin after a 1-1 draw in regulation time.

According to the chairman Kiambu Arsenal Fans Club Georges Mugambi, the team impressed and exhibited team work as planned.

“I am very delighted by the victory. Imagine no team scored against us in the pool matches upto finals where we went for penalties,” He said.

“We had planned well and the boys showed teamwork which earned them victory,” Mugambi added.

The team which plays in the provincial league comprises of local talented players sponsored by the Kiambu Arsenal club.

“These are the players we picked locally with a view of nurturing their talents when we started this fan club. We saw it good to have a team that we can help,”Mugambi explained.

While saying that they want to build the team so that it can play in their top tier league, Mugambi said the team needs a sponsor.

“At the moment we are looking for a sponsor. Our vision is to see them play against the big teams or even advance to the top tier league,”

“As per now we have 55 members at Emirates Lounge in Kiambu where we do all our activities. The football has changed their lives since many were jobless but through it their livelihoods have improved,”added Mugambi.