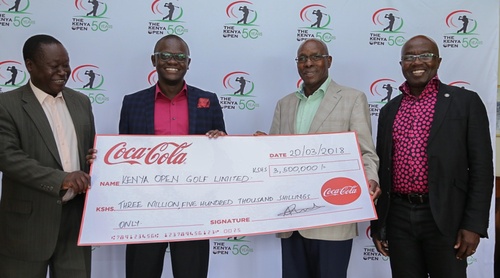 The Kitty of the Kenya Open Golf Tourney has benefitted from a further 3.5million after the Coca-Cola Central, East and West Africa franchise was named as the sole beverage sponsor for the 50th edition that began on March 9, 2018, at the Muthaiga Golf Club.

The beverage company will use its water brand, Keringet, to provide beverages for both the professional and amateur golfers, and the fans who will attend all the Kenya open golf series that will culminate with the European Challenge Tour from March 22 to 26, 2018 at the Muthaiga Golf Club.

Andrew Alovi, the Marketing, and Assets Manager for the franchise in the region spoke of the beverage company's pride in being associated with the prestigious tournament which was the beginning of the European Tour Golf Tournament. He said this as he handed over the 3.5 million to the tourney's kitty whose prize fund has been increased to  500,000 pounds equivalent to KES 62.5 million making this years' tourney the most lucrative tour in the European tour qualifier.

He added that making the Golden Jubilee celebration is especially significant saying that it testifies of the great value Kenya has given to golf. He pledged support for the golfers through the provision of beverages in the tournament.

This year Kenya Open will go into the history books as one of the longest-running African events on the European circuit, attracting some of the best golf players from all over the world.This will go along way in showcasing the country to the international community and across the globe as well as marketing Kenya as a golf tourism destination of choice.