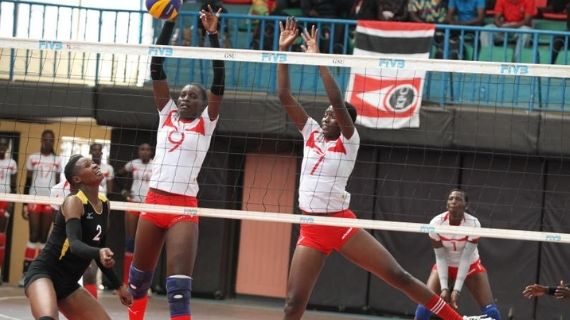 All three Kenyan representatives at the Africa Women’s Volleyball Club Championships in Tunisia will be in action this afternoon as the tournament serves into the last 16 stage.

All three Kenyan representatives at the Africa Women’s Volleyball Club Championships in Tunisia will be in action this afternoon as the tournament serves into the last 16 stage.

National champions Kenya Prisons who were the last Kenyan team to win the title in 2013 have been in good form in the group phase, winning all their matches and will look to continue in their form when they take on DR Congo’s La Loi in the round of 16.,

The third place finishers from last year’s Championship picked straight set wins over Ethiopia’s National Alcohol, Naval of Nigeria and Rwanda’s APR in the group phase of the competition.

They will be definite favourites against La Loi who lost all their pool stage matches by straight sets.

Meanwhile, KCB who won two and lost one of their three pool matches will take on Customs from Nigeria in the other round of 16 duel. The bankers beat Asec Mimosas of Ivory Coast and Ndejje University of Uganda, with their only loss being a 3-1 defeat at the hands of home girls Carthage.

Customs won one match and lost two in the group phase. Their only victory was a straight sets win over Ghana’s El Wak.

Kenya Pipeline will then take on Uganda’s Ndejje in the other round of 16 match. The Oilers, who last won the Continental title in 2005 finished second in their group with wins over EL Wak and Customs, while they suffered a 3-1 defeat at the hands of defending champions Al Ahly of Egypt.

At the same time, one of the Kenyan teams will have to be eliminated in the quarter finals. If KCB beat Customs and Prisons go through against La Loi, then the two Kenyan sides will meet in the quarters.